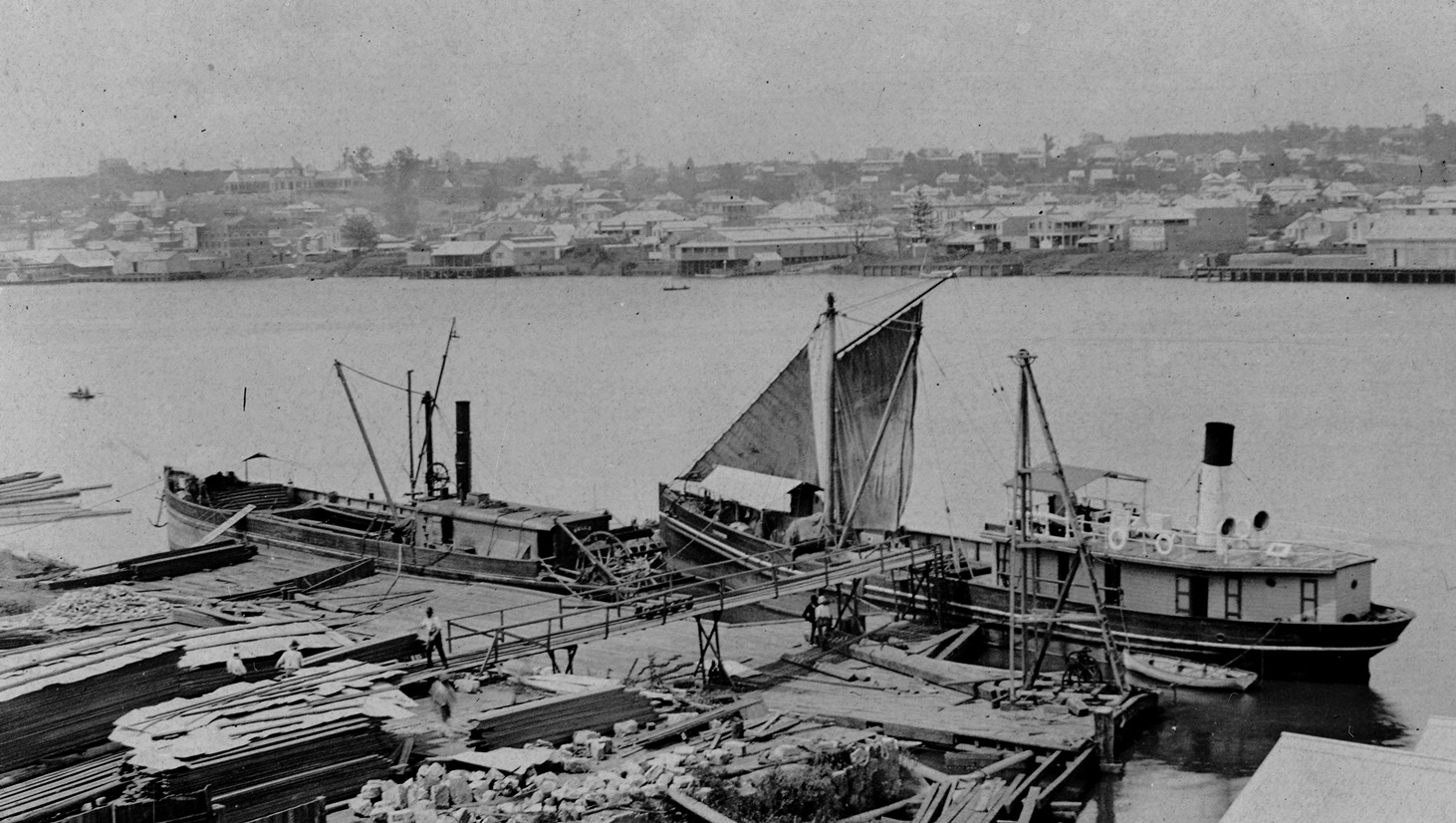 The Gneering (left) and the Tarshaw (right) berthed at Pettigrew’s Wharf, downstream from Queen’s Wharf, circa 1892. SLQ image 64740-2.

To have a sawmill in Brisbane near Queen’s Wharf was one thing; to satisfy the needs of the growing colony for sawn timber was quite another. As the colony developed and to expand his business interests, sawmiller William Pettigrew required access to the timber resources, as well as the capacity to transport felled logs and other goods and materials to and from regional business locations. For forty years, three vessels associated with William Pettigrew served this purpose.

The first of the Pettigrew ships was the Gneering. Originally owned John Williams, the proprietor of the first ferry across the Brisbane River (from Russell Street to Queen’s Wharf), this 60 feet (18.28 metres) sailing ship known then as the John was constructed by David Steel in 1856. The  John was purchased in 1862 by William Pettigrew and his partners, James Low and William Grigor. The latter operated a timber depot at the mouth of the Mooloolah River.  The John was renamed Granite City.

To make it easier to transport logs from Mooloolah to the steam mill just down stream of Queen’s Wharf, the partners adapted the Granite City by lengthening her stern by 18 feet (5.48 metres) and installing an engine and boiler to run the stern-wheel paddle. She was renamed the Gneering, an aboriginal word for black swan. Her main role was to carry people, goods and timber up and down the coast from Brisbane to Mooloolaba.

To supply coal for the steam sawmill, the Gneering steamed upriver to Ipswich. On arrival in Brisbane from one such return journey in February 1875 she was found to be leaking. During an attempt to run her ashore on the south bank of the river, just above the Victoria Bridge, the Gneering filled and sank. It took five months for her to be re-floated and brought back into service. Despite this setback, for the next thirty years the Gneering sailed up and down the Queensland coast until mid-1892. On passage from Noosa to Brisbane carrying timber, the Gneering was wrecked in the mouth of the Maroochy River. Towed to Goat Island, what remained of the Gneering was left to disintegrate.

Waiting for the Gneering to steam up the Brisbane River with its periodic cargoes meant that Pettigrew’s mill was often under-utilised. Another ship was needed. In 1865 William Pettigrew decided to build a tugboat to tow rafts, one that could negotiate the narrow channels of the coastal rivers and sandbars. In late 1865 and into 1866 the sawmill’s shipwright, Matthew Miller, built a stern-wheel paddle steamer, 63 foot (19.2 metres) in length, 12 foot (3.65 metres) in beam, and with a 6 foot (1.82 metres) draft, in a shed on the river bank at South Brisbane. She was named the Tadorna Rahjah, the Latin name for the Burdekin duck, and launched in July 1866. Like the Gneering, she travelled up and down the coast carrying timber, goods and people for nearly 30 years, finally acting as a tender for Pettigrew’s third vessel, the Tarshaw. The Tadorna Rahjah sank during the Brisbane River floods in February 1893, ending up beached at the Hamilton Reach where she was eventually broken up.

In 1884 Pettigrew leased the riverbank below Lot 7 on William Street and erected a large shed where Matthew Miller began building the Tarshaw. Named after Pettigrew’s home in Scotland, the Tarshaw like her sister ships, was used to bring timber down from the Sunshine Coast region. At 113 feet (34.44 metres) in length, with a 20 foot (6.09 metres) beam and draft of 8ft 6 ins (2.59 metres), the Tarshaw was significantly bigger than the Gneering and the Tadorna Rahjah. A twin screwed vessel, she had 3.5 times the capacity of the Tadorna Rahjah.

Tarshaw was launched on 6 March 1886 by Pettigrew’s daughters.  After four months fitting the engines and boilers, her first run was to Maroochydore in July 1886. The ship was not always used for mill-related work. A newspaper report for June 1887 described how the Tarshaw and the Tadorna Rahjah transported 260 employees of the sawmill, along with a brass band, to a picnic at Redcliffe. After the loss of both the Gneering and the Tadorna Rahjah in 1892-93, Pettigrew continued operating with the Tarshaw alone but his business was in trouble. He was declared bankrupt in 1898. The Tarshaw was sold by mortgage sale for £1,250 to the Broadsound Meat Company of St Lawrence in July 1899.

A tragedy all round